A portion of George Washington’s original Mount Vernon estate sold in late October for $48 million, setting a new record for the most expensive residential transaction ever in the region.

The 16.5-acre estate in Alexandria, Virginia, was part of Washington’s River Farm—which America’s founding father owned and maintained in the 1700s, according to the American Horticultural Society. It features 400 feet of Potomac River frontage, a dock and a 16,000-square-foot main home with river vistas from nearly every room.

The property, called the River View Estate, included $2 million in personal goods and is the most expensive home transaction ever recorded in Virginia, Maryland and Washington, D.C., according to the Multiple Listing Service. 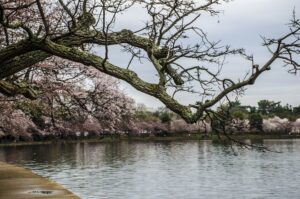 The previous record was for late AOL co-founder Jim Kimsey’s McLean estate, which sold two years ago for $45 million.

According to the listing description, the grand residence features such amenities as a circular glass room overlooking the water and grounds, numerous terraces, a wood-paneled library, a game room with a full bar, and a fitness center with an indoor pool and spa. Additionally, there is a guest house with three bedrooms and a carriage house with a studio apartment.

The Alexandria mansion is surrounded by groomed lawns and gardens inspired by antique blueprints discovered on the property. Formal landscaping includes rose gardens and English boxwood shrubs, which are bordered by mature trees that provide the estate with additional privacy.

The estate was previously owned by Robert Stevens, former CEO of Lockheed Martin, and had been on the market since entering the market at October 2020 for $60 million. Its transaction comes fewer than two years after Jim Kimsey, the late co-founder of AOL, sold a 3.2-acre McLean, Maryland, mansion for $45 million. That was the previous record holder for the Alexandria-D.C. region.