The tagline “What happens in Vegas, stays in Vegas” has become recognizable worldwide since it was introduced nearly two decades ago by the convention and visitors bureau.

But it fails to acknowledge that not everyone who comes to Vegas, stays in Vegas itself. When Kiss co-founder Gene Simmons was shopping for a second home in the Las Vegas area last year he found what he was looking for in neighboring Henderson. 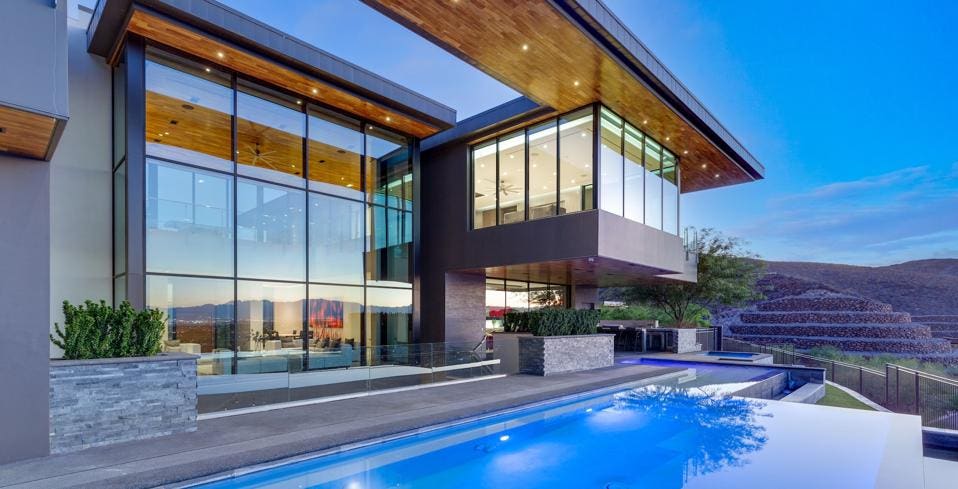 The modern home has strong horizontal lines and expanses of glass. (THE IVAN SHER GROUP)

The well-heeled suburb offers panoramic views of the Las Vegas strip – some 12 miles away as the crow flies – and of the 320-acre Lake Las Vegas. Notable residents have included NBA players, pro boxers and U.S. Senators, among others.

Now the Kiss frontman has a world tour to attend to and is moving on. The nearly one-acre property he is selling is in the gated Ascaya community, complete with a clubhouse, groomed community walking trails, a family park and a fitness center. 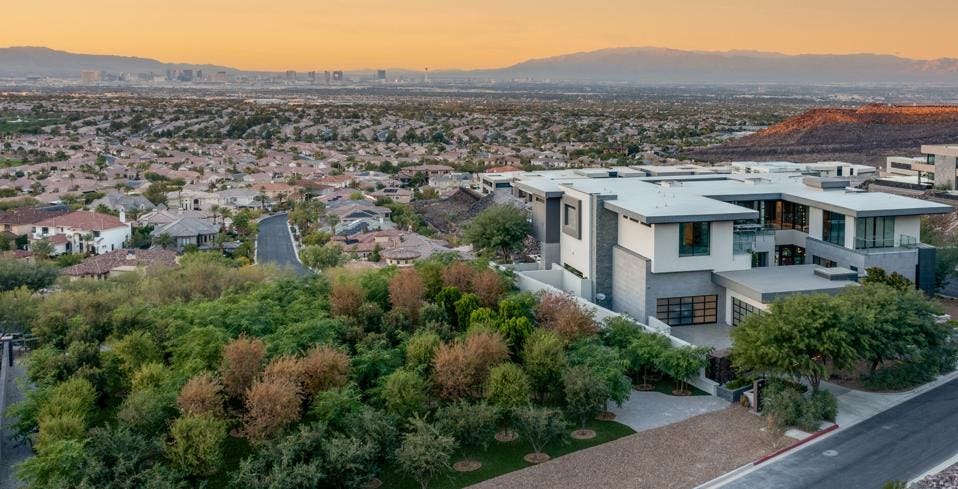 The home’s adjoining lot was planted with some 130 trees. (THE IVAN SHER GROUP)

Expansive gardens made up of some 130 trees, paths and artificial turf accompany his nearly 11,000-square-foot mansion.

The modern home is entered through a courtyard by way of a pathway that appears to float over a koi pond. Floor-to-ceiling sidelights flank the massive wooden front door. 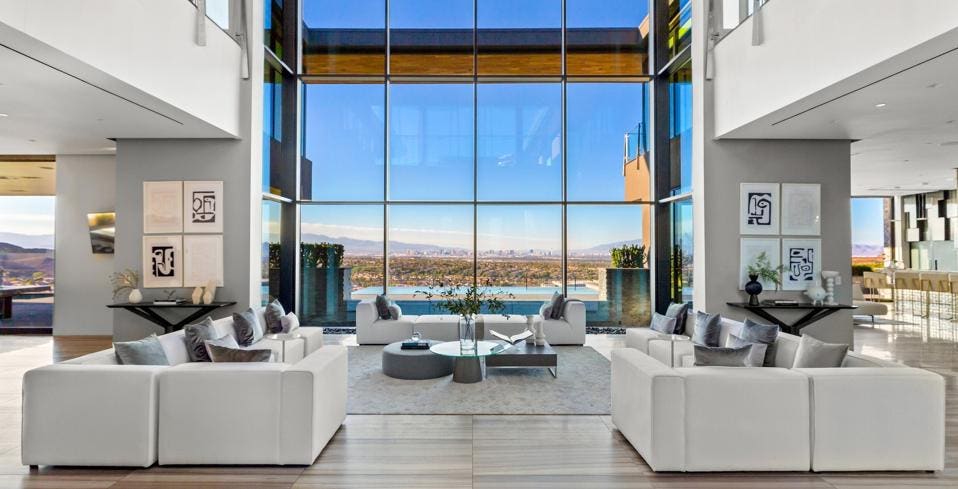 The center of the great room has a voluminous double-height ceiling and a two-story wall of glass that overlooks the Las Vegas Valley. Natural stone, wood ceiling accents and unfinished concrete are among the details.

Concrete brick and glass walls line the central staircase. An elevator also serves all three levels of the home. 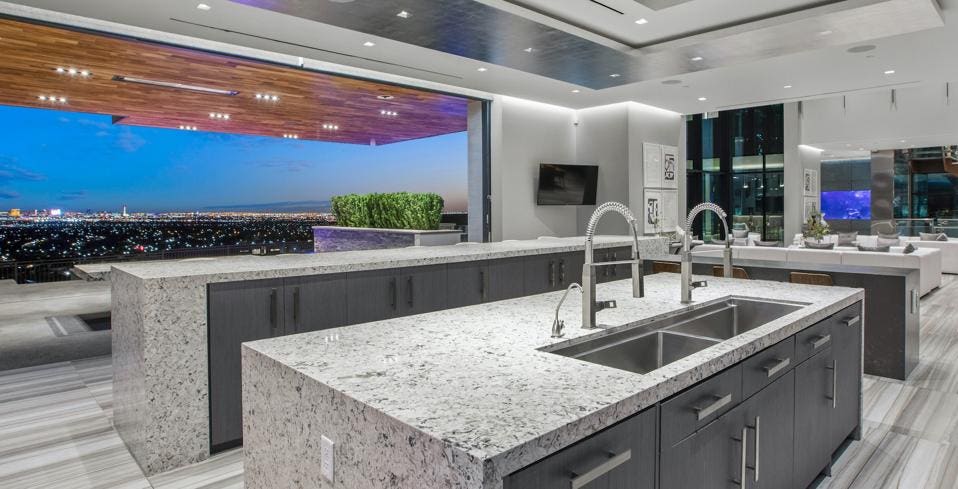 The disappearing glass walls blend the indoor space with outdoor entertainment areas including patios, a hot tub, a fire pit, a swimming pool and an outdoor kitchen. 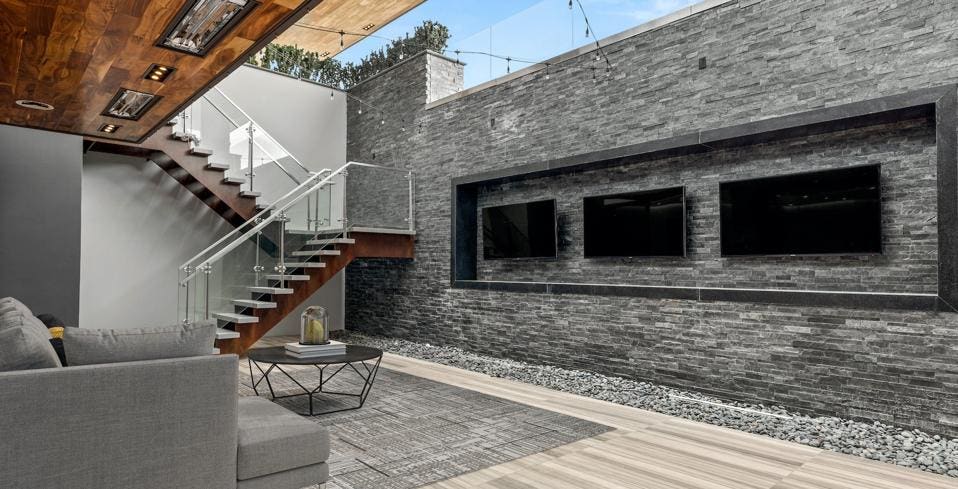 The lower level of the house features an outdoor living room. (THE IVAN SHER GROUP)

Living spaces include a home theater, a bar/lounge area, six bedrooms and eight bathrooms. There’s also an 11-car garage. A misting system runs the entire perimeter of the house.

Ivan Sher and Evangelina Duke-Petroni of the Ivan Sher Group are the listing agents for 7 Talus Court, Henderson, Nevada. The asking price is US $13.5 million. 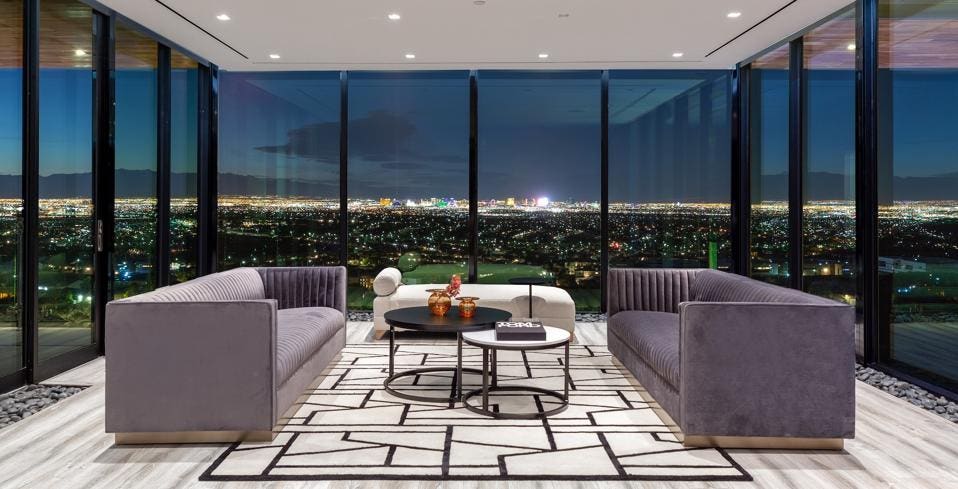 The Las Vegas Strip lights up the desert sky. (THE IVAN SHER GROUP)

In addition to interior improvements, Simmons created what amounts to a private park on one side of the mansion. He paid a combined $10.8 million for the home and for the adjacent parcel in May.
We use cookies on our website to give you the most relevant experience by remembering your preferences and repeat visits. By clicking “Accept All”, you consent to the use of ALL the cookies. However, you may visit "Cookie Settings" to provide a controlled consent. Read more
Cookie settingsAccept all
Manage consent
Privacy Overview
This website uses cookies to improve your experience while you navigate through the website. Out of these, the cookies that are categorized as necessary are stored on your browser as they are essential for the working of basic functionalities of the website. We also use third-party cookies that help us analyze and understand how you use this website. These cookies will be stored in your browser only with your consent. You also have the option to opt-out of these cookies. But opting out of some of these cookies may affect your browsing experience.
Necessary Always Enabled
Necessary cookies are absolutely essential for the website to function properly. These cookies ensure basic functionalities and security features of the website, anonymously.
Analytics
Analytical cookies are used to understand how visitors interact with the website. These cookies help provide information on metrics the number of visitors, bounce rate, traffic source, etc.
Advertisement
Advertisement cookies are used to provide visitors with relevant ads and marketing campaigns. These cookies track visitors across websites and collect information to provide customized ads.
Non-Mandatory
Cookies that are not particularly necessary for the operation of the website and that are used specifically to collect personal data from the user through analytics, advertisements or other integrated content are called unnecessary cookies. It is mandatory to obtain the user’s consent before using these cookies on your website.
SAVE & ACCEPT