History And The Avant-Garde Collide At An Eclectic Dwelling In Alicante, Spain

We reached Javier Sempere in Alicante, Spain during the peak of his country’s preeminent festival–the Bonfires of Saint John. Held during midsummer, Alicante’s raucous lineup of parties, rituals and street dancing is the largest such bonfire bash in Spain.

“The whole city is on fire tonight,” says Sempere from his recently renovated three-story home with its handsome facade. It was the evening of la cremà, the burning, when fanciful effigies symbolizing the past were being torched in the streets, squares and on the beach.

Sempere has an excellent view of the festival–his front windows overlook Calvo Sotelo Square, which dates back to the 16th century. The three-bedroom two-bathroom home, erected in 1900, is a historical fixture in Alicante, but after nearly 20 years of ownership, Sempere is regretfully selling the home since work occupies him elsewhere. 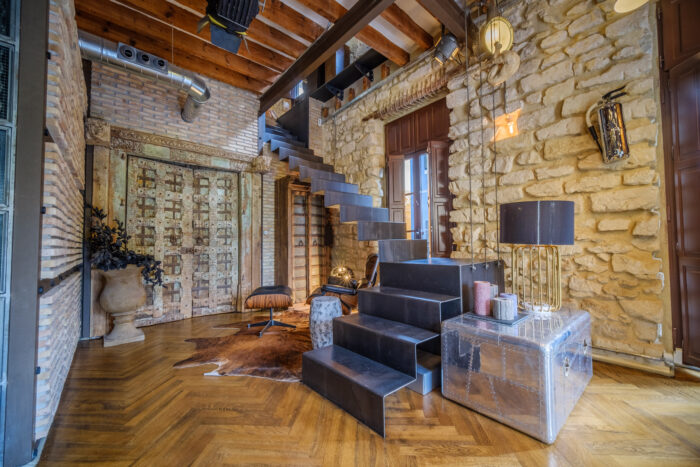 But not everyone has been inside, where the real wonder of 17 Plaza Calvo Sotelo can be seen. Stripping away layers of prior renovations, Sempere has revealed original white stone on interior walls. Moreover, he’s matched that rough-hewn look with an eclectic industrial design. The avant-garde interior includes an exposed HVAC system, original steel girders, floating iron staircases and ancient doors sourced from Bali and temples in India.

“Everyone who visits says, ‘Oh my God, this is here? I mean, I would expect this in New York or Berlin, but this is really a surprise,’” says Sempere, who was born in Alicante, perched on Costa Blanca’s 200 kilometers of Mediterranean coastline. He studied engineering and industrial and interior design at CEU’s Valencia campus. In 2009, he founded Massa Projects, which specializes in residential and commercial projects.

In 2003, a 23-year-old Sempere began buying the building floor by floor starting with the top floor. He purchased the second floor in 2010 and finally the first floor in 2017, all while renovating at a total cost of €1 million. An herbal shop occupies the ground floor, which he does not own.

“It was a really big investment for me, and now it’s my masterpiece,” Sempere says.

The light-infused building is positioned on a corner, allowing for an unprecedented 15 balconies. “Now, they do little windows when they build, and if they have balconies, it’s just two or three on the main facade,” Sempere says. 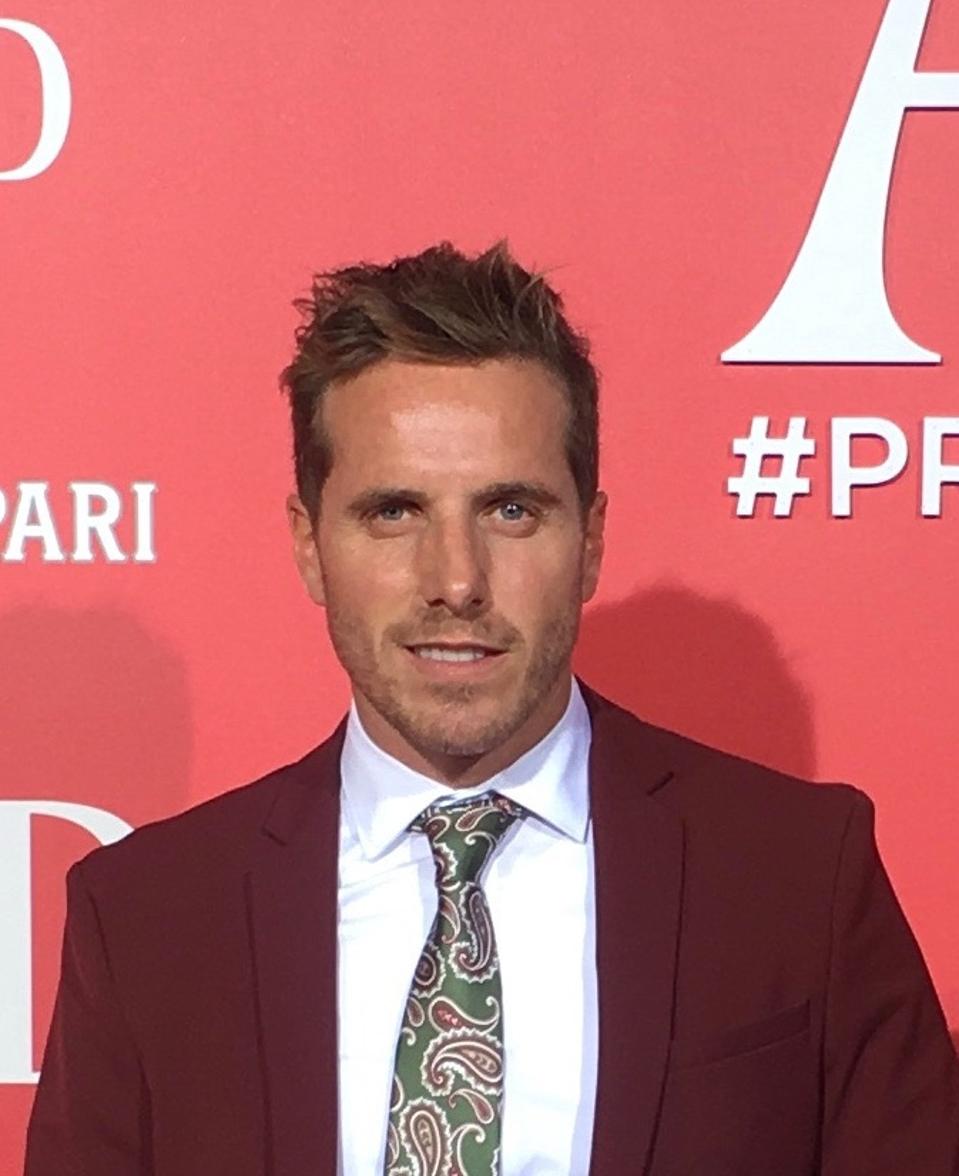 The home’s entrance is on the third floor. An open living room with a kitchen and dining room fills the space that also includes a service bathroom. A loft space hovers above with two bedrooms, bathroom and access to a rooftop terrace. In the loft, a corridor laid with a glass floor affords a view of the downstairs entry. The primary bedroom and bathroom occupy the floor below and include a dressing room, office, a reading area and a gym. All bedroom floors are heated. 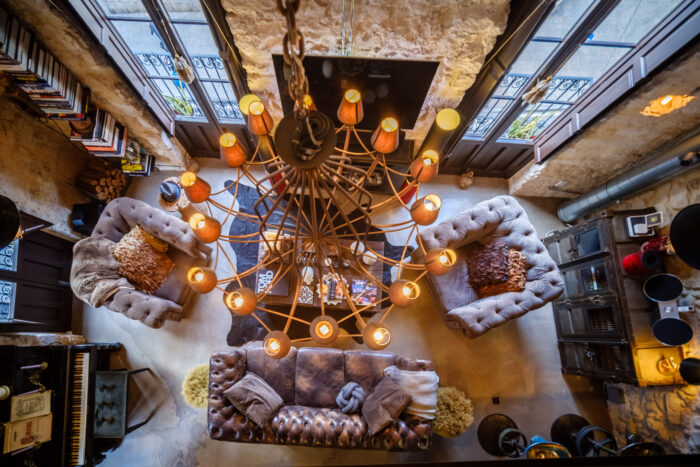 The rough-hewn white stone walls had been obscured by prior renovations. (INMOBILIARIA RIMONTGO)

Rare global finds fill the home; Sempere offers all of them as part of the purchase price–including an 1890 upright piano with candle sconces sourced in Paris. A tufted leather couch fashioned from the front one-quarter of his 1972 Mini Cooper is a kitschy touch, especially since the headlights work. The various furniture, light fixtures and other items have been custom fit into the home, completing Sempere’s singular vision. 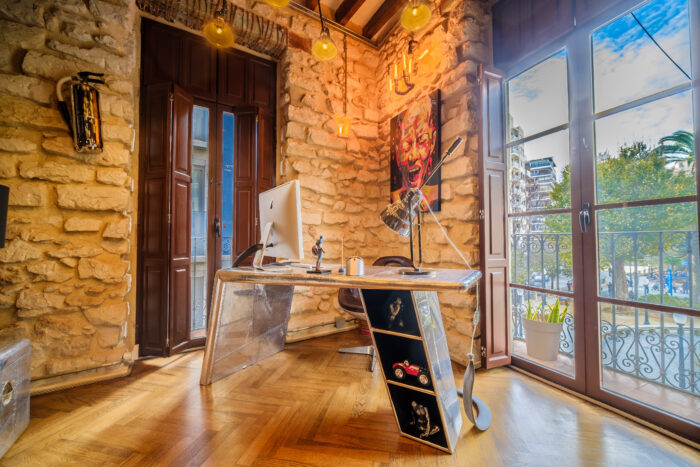 The office/den features a gleaming chrome desk made from a salvaged airplane wing. The home’s rare global finds like the desk are included in the purchase price. (INMOBILIARIA RIMONTGO)

“With all the sadness of my heart, I’m selling this home because 80% of the time, I’m no longer in Alicante,” says Sempere, who often works in the Balearic Islands off the coast of Spain. “My life’s passion has been creating this home.”

The primary bedroom includes the home’s original fireplace with ornate pilasters but it’s now fitted with a sleek liquid ethanol furnace. The mantelpiece is a wood beam cut from a nearby rail track; similar wood is also used elsewhere in the home. 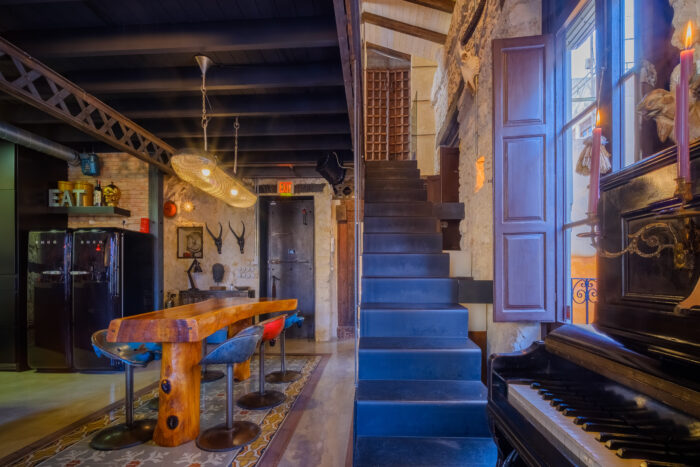 “For me, the kitchen is a piece of art–it’s made of just one piece,” Sempere says. A vent hood hovers above the sleek cooking station and sink, and just opposite are dual retro-style Smeg refrigerators finished in ebony. There’s a striking Y-shaped oak table in the adjacent dining room. Dating to the 1960s, it was sourced in Bali.

Minimalist floating staircases traverse two of the floors. Constructed in one piece from polished iron, the staircases are art objects in themselves. Contrasted with the ornate Balinese and Indian temple doors, the look could be called upscale Bohemian. The home has an additional original staircase, faced in blue tile, that links all the floors. That could be removed, however, in favor of a lift. 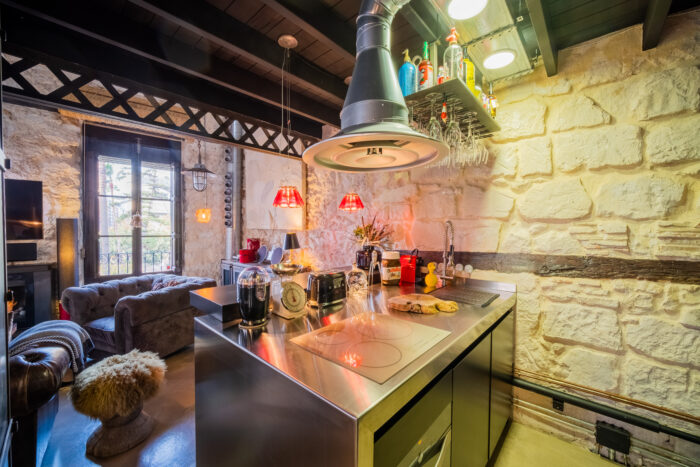 Sempere first fell in love with the building when he was a boy. “I would always pass it and admire it,” he said. “It looked like an antique palace. Back in the ’60s and ’70s, many of the historical buildings were being knocked down; I hoped someone would renovate it.”

The original owner lived on the top floor with apartments for each of her three sons on floors beneath. Sempere got to know her, and she soon realized Sempere’s genuine passion for the structure. She agreed to sell the building to him as his funds became available–floor-by-floor. 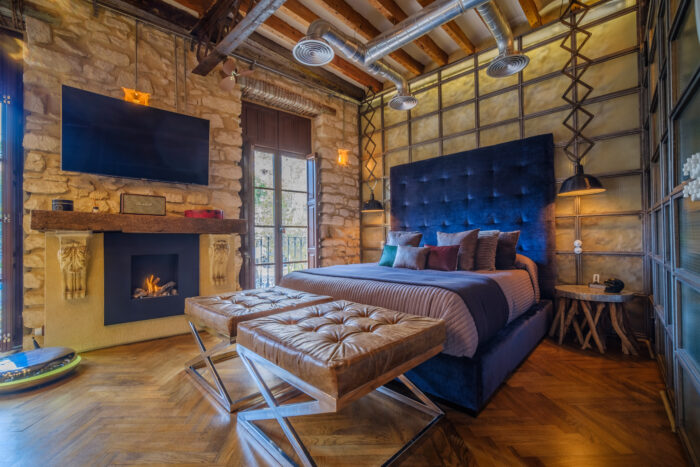 Sempere first tore out a 1960s renovation that “was horrible,” he says but it had fortuitously protected “the jewels of the house,” which included stone walls and tiling among other features. “When I discovered that, I knew it was going to be an amazing project.” 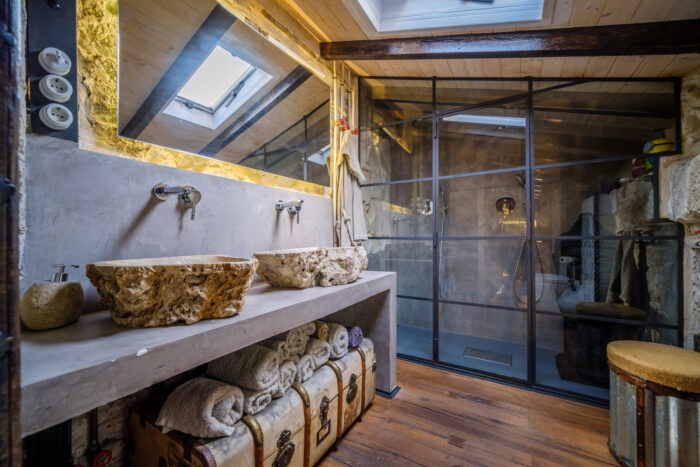 Although the home is historical, zoning allows for three additional floors to be built on top of the building. “So, you could even build a super modern glass cube on top,” Sempere says. “It’s a really good investment.”

Floors are covered with either original tile or lustrous oak done in a herringbone pattern. Many ceilings are set with beams. Bathrooms feature rough-hewn marble vessel sinks, and in one there’s a whimsical urinal in the shape of an open mouth with fire engine red lips. 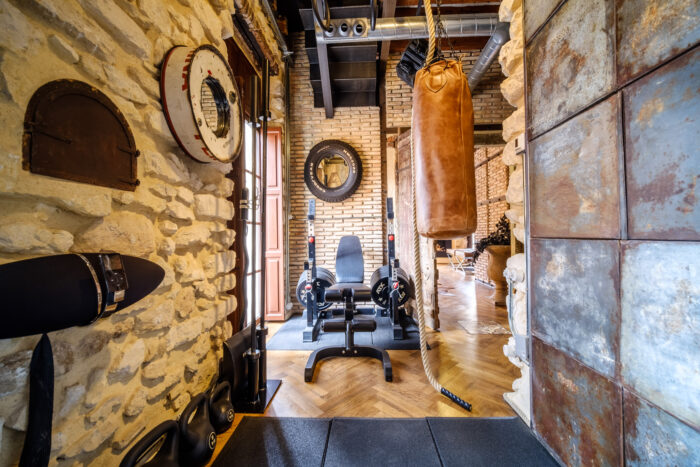 Some light fixtures were sourced from a theater and a church in Madrid, gracing the home with an urbane polish.

A gym off the master bedroom includes a bench press, free weights and a punching bag. The walls are done in weathered tile. An inventive laundry is adjacent. It consists of custom-made black metal containers that open up to a washer, dryer, ironing station and clothing rack. 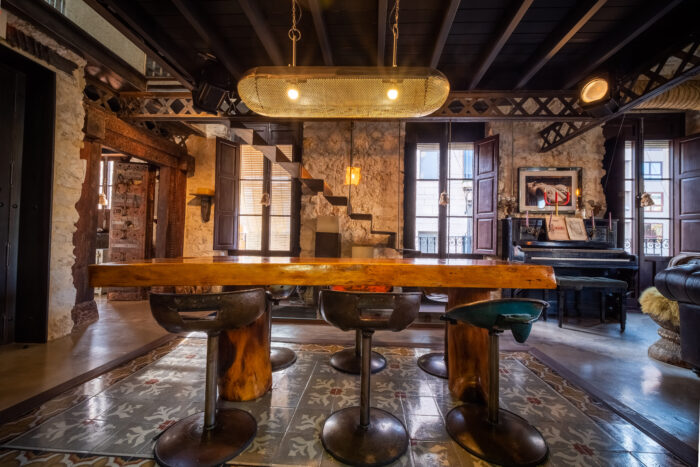 The eclectic furnishings, such as the dining room set, will be included in the purchase of the house. (INMOBILIARIA RIMONTGO)

While the home itself could be termed an epicurean delight, that’s most evident in a top-floor bedroom. There, an elegantly sloped antique bathtub with gleaming claw feet sits about a meter from the bed. Detached from usual bathroom decor, it seems like another piece of furniture–perhaps reminiscent of a scene out of a steaming romance novel. Best of all, it’s fully plumbed.

“I bought it in an antique shop in Valencia,” Sempere says of the fixture. “You can have a relaxing bath while talking to your partner, maybe while they read in bed or watch TV. It’s super nice.” 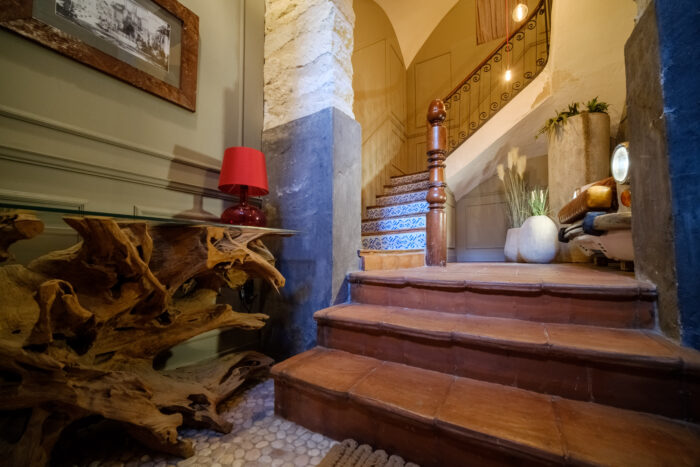 Victoria Kabisova of Inmobiliaria Rimontgo has the listing. The asking price is available on request.