Restored and expanded for a 2020s lifestyle, this artful Midcentury Modern home in Beverly Hills’ Trousdale Estates traces its origins to a starlet and a master architect.

The minimalist residence was built for Paris-born actress Corinne Calvet, who voiced Rita Hayworth in French versions of American films. She would go on to be signed by Paramount, MGM and 20th Century Fox, starring alongside such leading men as John Drew Barrymore and Danny Kaye. 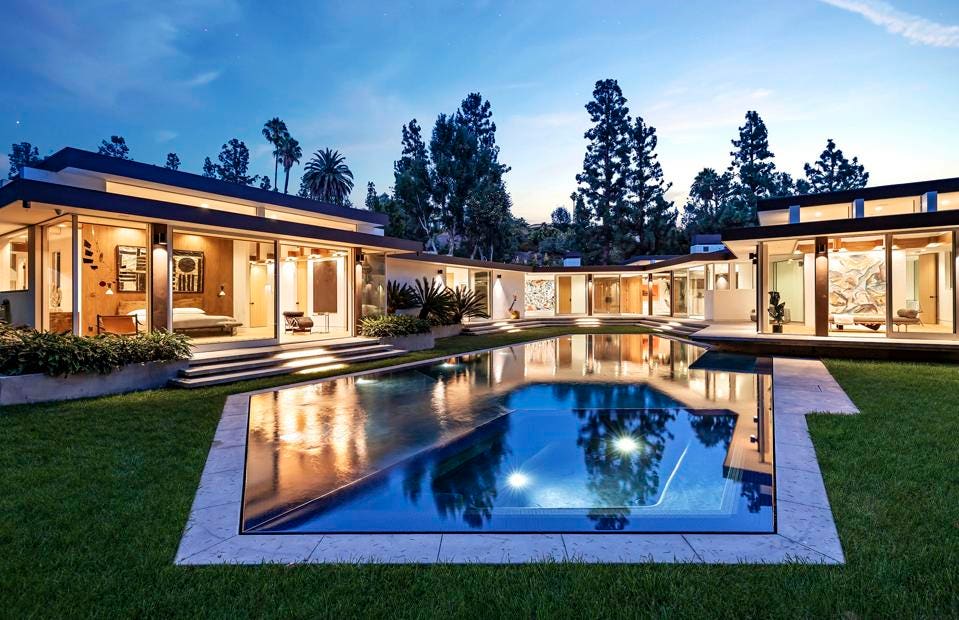 The irregular shape of the zero-edge pool follows the lines of the house. (HILTON & HYLAND)

The showplace was designed in 1959 by L.A. architect Rex Lotery. Known for Elvis and Priscilla Presley’s marital residence in Trousdale Estates, Lotery is today included on Beverly Hills’ list of Master Architects. Inclusion is one determining factor in identifying historic and notable homes deemed worthy of preservation.

Reimagined by the design team of Philippe Naouri and Eric Choi at Maison d’Artiste, and in collaboration with Studio Tim Campbell, the house maintains its architectural integrity while displaying contemporary design elements. 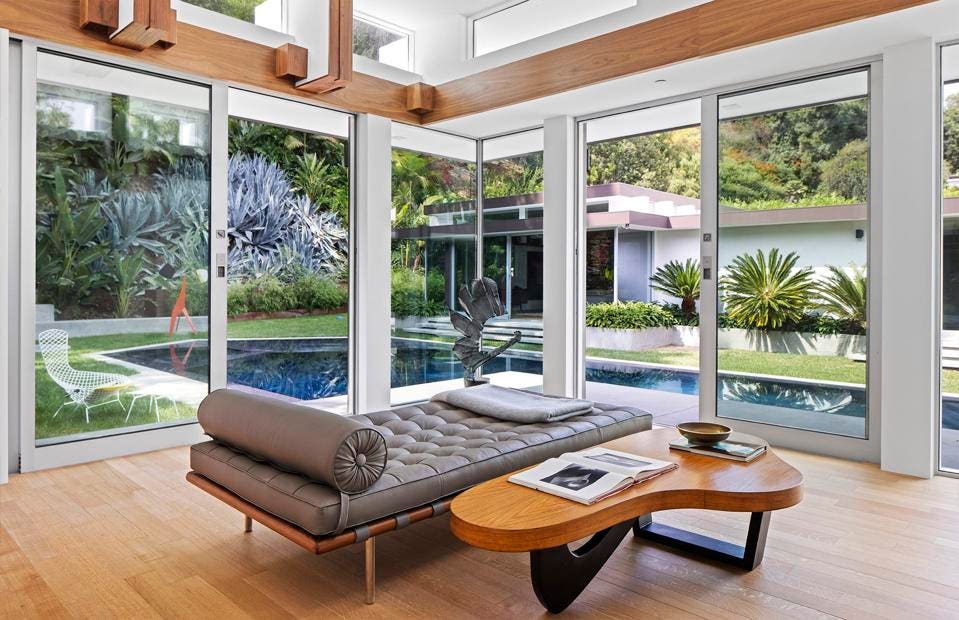 Walls of glass look out onto the swimming pool. (HILTON & HYLAND)

A curving driveway and low-rise landscaping soften the strong horizontal lines at the fountain-lined entrance of the more than half-acre property.

Raised pop-ups of clerestory windows and cutout portions of roof add visual interest to the exterior. The double front door opens to a wall of glass. 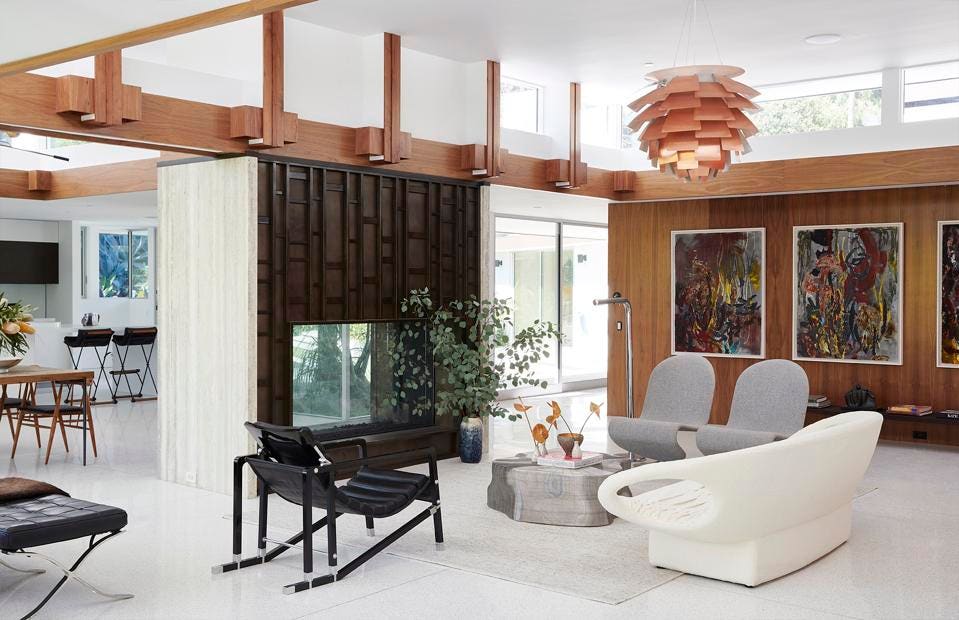 The home was expanded to 8,800 square feet of open-concept space. (HILTON & HYLAND)

The 8,800 square feet of living space looks inward onto a courtyard swimming pool at the back. The irregular-shaped zero-edge pool mirrors the lines of the house and is surrounded by lawn.

An atrium and a see-through fireplace connecting the living room areas enhance the feeling of spaciousness. The open-plan kitchen blends seamlessly with the dining room. 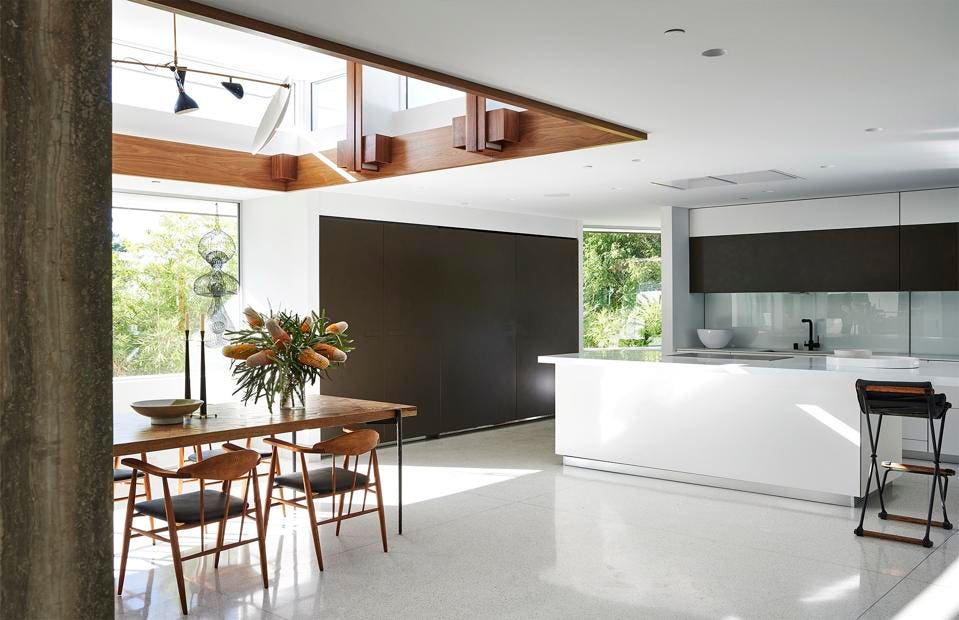 A raised portion of ceiling brings light into the dining room, which opens to the sleek modernized kitchen. (HILTON & HYLAND)

A screening room, an office and a temperature-controlled subterranean wine room are among other living spaces. There are six bedrooms and eight bathrooms.

Mick Partridge of Hilton & Hyland is the listing agent for 1061 Loma Vista Drive, Beverly Hills, which is priced at US $27 million.

The property is about 16 miles from Los Angeles International Airport.